Lara Croft returns for a trip to the frozen wastes of Siberia.

Author’s Note: I played the base game with the DLC Baba Yaga: The Temple of the Witch. It included an area called the Wicked Vale that is not present in the base game but contains the same basic gameplay.

Set not long after Lara’s adventure on Yamatai in 2015’s Tomb Raider, Rise of the Tomb Raider sees Lara trying to restore her late father’s good name. Her father had recently committed suicide after being ridiculed for believing that there was such a thing as the Divine Source. The Divine Source was a magical item that could cure someone’s ailments and keep them alive. Saddened by her father’s death and determined to provide proof of the Divine Source’s existence (for she had seen enough phenomena of the supernatural variety on Yamatai to believe it could be true), Lara decides to take up her father’s research. After a quick jaunt to a prophet’s tomb in Syria (who supposedly had the Divine Source), Lara finds evidence indicating that the prophet’s followers retreated to Siberia and founded the lost city of Kitezh.[1] With this evidence in hand, Lara goes forth to Russia to discover the truth where she finds more than she bargained for.

Rise is a third person action-adventure game with many similarities to the earlier Tomb Raider. This isn’t necessarily a bad thing as the 2013 title is a stellar game as well. Rise has Lara going from one set piece action scene to the next with hub areas, exploration, and plenty of collectibles scattered in between. Hub areas could be anything from an old Soviet era installation to a village of local villagers to tunnels through the locally abundant mountains. Coin caches, murals, documents, survival caches, challenges, and, of course, tombs are all yours to find in each of the areas. They are all optional to discover but they do offer various rewards and sometimes interesting lore for the area you are traversing. In addition, they give you experience points which nets you skill points that you can spend on the three main categories of Hunter (finding wildlife and collectibles), Brawler (fighting), and Survivor (resource gathering). Skill points are gained through fighting as well but finding some or all of the collectibles will go a long way in ensuring your journey is a little easier. 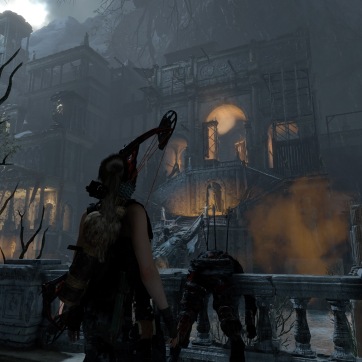 One of the best aspects of the exploration are the tombs. The tombs usually consist of a puzzle that you must solve in order to gain access to a treasure that provides an upgrade to Lara. Upgrades could be anything from the ability to climb ropes faster to better fire arrows for your bow. The tombs not only excuses to put puzzles in the game but were locations of importance in the daily lives of the citizens of (minor spoiler warning, I guess) Kitezh. Documents and murals found within the tombs provide answers as to why the city was destroyed, how the citizens lived, and why a Soviet base was built on top of it. These tidbits may not be of interest to the casual player but they helped flesh out the world and made it believable. The addition of crypts (the cousin of tombs) to the game also really help explain the history of Kitezh. As advertised, they are the burial places of important people who helped found the city. Unlike the tombs, crypts don’t offer any puzzles or challenges but they do grant a reward that enhances gameplay for the explorer who takes the time to look into them.

For those who are interested in the explosions and shooting that are required for all action adventure games, then never fear because you won’t be disappointed. Rise offers a wide array of weapons and combat techniques just waiting to be used. Pistols, rifles (bolt-action, semi-automatic, and automatic), shotguns, an ice pick, and Lara Croft’s iconic bow are all at your disposable to make sure no one stands in your way. You can even craft Molotov cocktails, smoke grenades, exploding radios, and booby trap dead enemies during fights. Each and every item you fight with can be upgraded at the many campfires scattered around each area (you can also fast travel between them just like in the first game). You can also craft ammunition easily on the go with the crafting materials found lying around everywhere. Hide, feathers, wood, oil, magnesium, and even mushrooms picked up from animals, boxes, and enemies can be used to upgrade your equipment and craft regular and special ammo. Sometimes equipment is given to you at certain points in the story that can open up new areas to explore and advance the plot. There is even a man who sells items (purchased with the coins found in coin caches) in a small shop in one area. All of this combines to reward you for exploring and scavenging and offers myriad ways of engaging in combat. 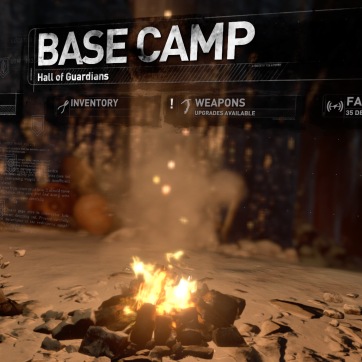 The Base Camp (in case you couldn’t tell)

Despite all the praise I have given the game, there are a few shortcomings in my humble opinion. There can sometimes be a jarring disconnect between the urgency of the plot and the exploration. There are certain parts where you’re told to hurry to save someone or to stop something from happening but you may get distracted (like me) by all the collectibles and side activities. This happens in any game but it is especially noticeable when you watch a cutscene where one of your allies is taken captive and you’re supposed to save them. Before you know it, however, two hours of exploring and looking for collectibles go by before you bother showing up to save them. It can ruin the immersion a little bit but I guess it’s more my own fault than anything else. Also, there can sometimes be a problem with the climbing and jumping mechanics. There will be parts when you must jump while hanging from a branch or a ledge. When you think you’re facing the right way and press the jump button, Lara will either jump the wrong way or not jump far enough and miss the next ledge entirely. This happened frequently enough for me to make note of it here. It isn’t game breaking by any means but it is noticeable after failing to successfully jump to the next ledge three times in a row.

As for the story, it is quite good. Lara, in her search for the Divine Source, comes face to face with the true villain of the series, Trinity. Trinity is a shadowy paramilitary organization searching for the Source to accomplish its own ends and it isn’t afraid to get its hands dirty doing so. The group sent by Trinity to find the Source is lead by a man named Konstantin. In an interesting departure for most villains, Konstantin actually has a compelling reason to find the Source. He isn’t your standard evil for evil’s sake villain. It is interesting to see Lara and Konstantin mirror each other in their quest to find what they both so desperately need. This dynamic makes the storyline more engaging than normal and adds a certain intensity to their relationship.

Rise of the Tomb Raider successfully builds upon what the 2015 reboot started. The combat, exploration, and collectibles all provide for an excellent experience. I would have liked more puzzles in the game but what is a man to do? More than that though, Rise accomplishes what any game in a similar vein must do. It takes a myth or a story found in our real world and portrays it for us to see. It puts an image of it in our mind’s eye. It makes it believable. It makes us ponder if there truly are secrets left for us to find here on Earth. For all the fun I had fighting, crafting, and completely challenges, what I will always remember is the way the myth of Kitezh was realized. Whenever I think of Kitezh (which admittedly will be very little), I will always think of this game. That’s where I think it truly succeeds. That’s why I wholeheartedly recommend playing Rise of the Tomb Raider.

Thanks for reading and check back next week where I will be discussing the state of Japanese games on Xbox!

[1] For those who didn’t know (like me), Kitezh is a city found in Russian myth. The story says that Kitezh was under assault by Mongol forces and the citizens of the city prayed to God for help. Heeding their cry, God plunged the city beneath the waves of a nearby lake thus depriving the Mongols of victory.

One thought on “Rise of the Tomb Raider Review”