All in the family.

Imagine, for a moment, your childhood house and all the people who lived in it. Now, imagine that they all died in tragic ways and, instead of moving their stuff out, their bedrooms were kept the way they were, sealed, and peepholes were drilled into the doors. And on top of all of that, you continued to live in that house until you were ten years old, left, and then returned seven years later to explore it and revisit the lives of all your relatives. Welcome to the life of Edith Finch.

What Remains of Edith Finch is a very simple game. In fact, many people would argue it’s not a game at all since it falls into the category of the very much derided “walking simulator.” I disagree, however, with this assessment as I had more enjoyment from Edith Finch than many big budget games with lots of action. The gameplay consists of you guiding Edith around the Finch household, exploring each bedroom (which are way cooler than any bedroom I’ve ever had), and interacting with different objects. The objects could be diaries, notes, letters, a photo slider, or even a comic book. By interacting with these objects, you are essentially transported into a mini-game, each with their own control scheme, that depicts the story of how Edith’s relatives died (or disappeared in one case). They usually feature narration of some sort along with visual representations. The art style differs in each story and they all complement the larger tale they are telling.

Since the gameplay is rather simple, the stories themselves are the real stars of the show. Each of the eleven stories tell how each member of the Finch household met their unfortunate end. These stories are all unique and strongly written and presented. The stories range from a death dream of a young girl to the fatal hunting trip of Edith’s grandfather to the mystery of a child star’s death in her teenage years. All of them conjure up a great sense of loss as all these people’s lives were abruptly cut short. Despite this, Edith remains determined to find these stories and hear them for herself (her mother disapproved of her hearing them). It is this determination coupled with the persistent sense of loss that makes both the individual stories and Edith’s overarching story compelling.

You will be guided around the house by floating text and Edith’s narration. 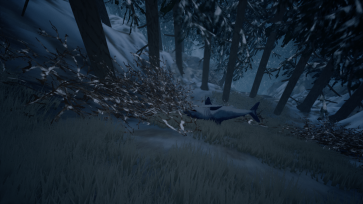 Yes, you are a shark on land at one point. 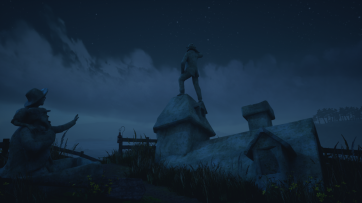 The house and grounds are one big museum to the Finch family. 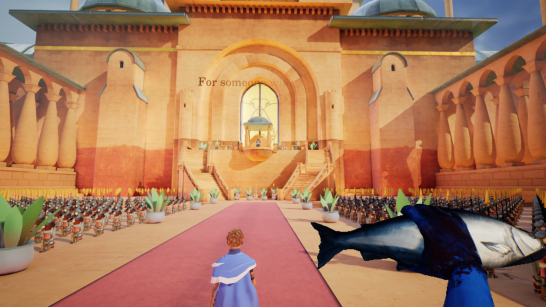 The success or failure of this game, I believe, lies in if one or more of the stories make a personal connection with you the player. A few of them did resonate with me and one (Lewis’ to be exact) cut a little too close to home for comfort. Even though it made me uncomfortable, it is the ability of these stories to evoke a feeling from the player that makes the game really shine. It allows us, the players, to examine the tales it tells and reflect on them. Some of the stories may not have much of an effect but some of them will and that will always stay with me. Even the ones that didn’t instill much of a response were at least interesting. There is even one story that has a connection to Giant Sparrow’s (the developer) first game, The Unfinished Swan. It is because of this strong story-telling that I was able to enjoy What Remains of Edith Finch and was able to look past its relatively simple gameplay. 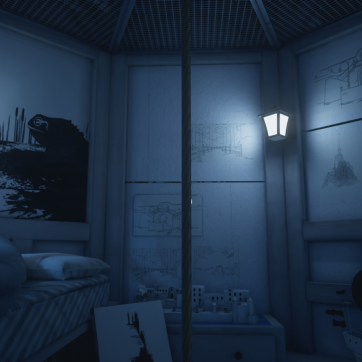 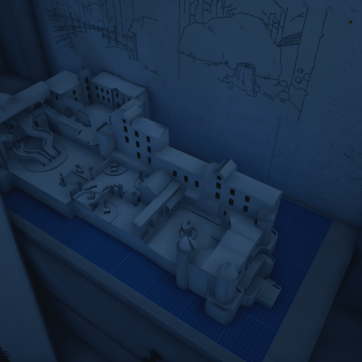 There are a few faults with the game, however. The framerate would sometimes stutter and textures and objects would pop in later than the rest of the scene. Additionally, some of the controls for the story mini-games were clunky and not really intuitive. Also, some will surely find the length of the game (two to three hours) to be lacking but I personally enjoyed it as it didn’t drag it out and put the focus on quality rather than quantity.

What Remains of Edith Finch is certainly not for everybody. It focuses on story, not gameplay, and seeks to establish an emotional connection with the player. You, as the player, can’t affect or change the story but are simply there to enjoy the ride. And what a ride it is.

Thanks for reading and tune in next week for Part 3 and the conclusion of Japanese Games on Xbox!