Author’s Note: Review Preview is a new concept I’m trying out today. It won’t be a regular feature here on Pretend Gamer but will be used whenever I’m playing a game that takes a lot of time. The format will not be set in stone and will be different for each game (whenever I do a Review Preview in the future, of course). Without further ado, let’s begin!

As the name implies, Octopath Traveler features eight characters (or paths, ha!) that you can pick at the beginning of the game. It is kind of a misleading, however, as you can recruit the other characters into your party and can follow their stories as well while playing your main character. It is important to note that whichever character you pick first has to remain in the party at all times. That means you must really like what you see when making your selection the first time around because that character will take up a slot in your party the whole game. After selecting your character and completing their story’s first chapter, the second chapter becomes unlocked and appears on the map. Additionally, the recommended level appears next to it. The lowest level I’ve seen for a chapter two was twenty-one so it appears the game was designed to make you go out and recruit the other characters (or at least some of them). 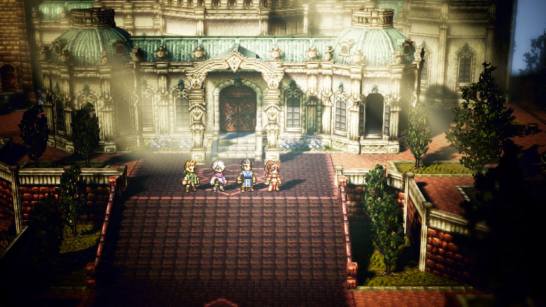 Four of our brave travelers. 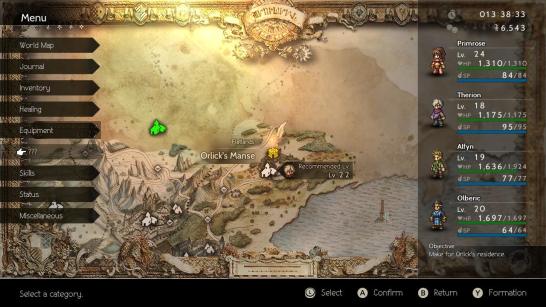 It isn’t a bad design, though, since you get to experience the other characters’ first chapters and afterwards they join your party. It is a little weird how you recruit them. There really isn’t any banter between your party and the other characters when you first meet. You basically walk up to them, they tell the beginning of the tale (you play that portion as well), and they join your party. And that’s that. There really isn’t any chatter between the characters which is disappointing since the group dynamic is the basis of many great JRPGs. Oh, and whenever you witness a story moment for one of the characters, your other party members don’t appear in the scene. It’s almost as if eight strangers are travelling together but aren’t really invested in each other’s stories. Having said that, once you get to a character’s second chapter, you can press “+” to hear some “travel banter” (as the game calls it) between two characters. This sort of design isn’t a deal breaker but it is a little disappointing.

As for the stories themselves, not all of them grabbed my attention during the first chapter (I’ve only completed the first chapters of each character). The stories range from getting revenge for your murdered king to searching for a missing book. I chose to start with Primrose because I liked her dark story. Some of the opening chapters seemed like complete stories unto themselves so it will be interesting to see how they develop further on into the game. It is also unclear as of yet if there is any connection between the different stories or not. There is no universal bad guy or evil empire to fight but, despite that, I like the more grounded and personal approach to the storytelling. I am interested to see if the eight characters’ stories intertwine in the future.

As for side quests, there are plenty of them. The side stories are very old school in their design in that the game provides clues and hints about how to complete them but doesn’t tell you outright or give you a map marker to point the way. You must figure them out on your own. There is no handholding. The quests usually must be completed by utilizing each character’s unique Path Action. These are special abilities your characters can use when interacting with the NPCs of the world, e.g. Therion can steal, Primrose can Allure people and have them follow her (even into battle), and Cyrus can Scrutinize people to glean important information. I would tell you the other characters’ Path Actions but I think you should find them out for yourself. When using a Path Action, each character has their own animations and sounds. There is a chance an action can fail and you may have to do it over and over again but doing so will impact your reputation. I haven’t had much experience with the reputation system so I can’t say what effect that has on your overall adventure. 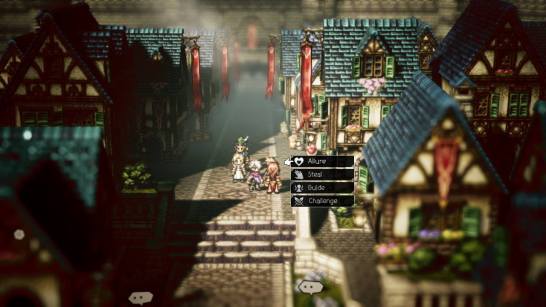 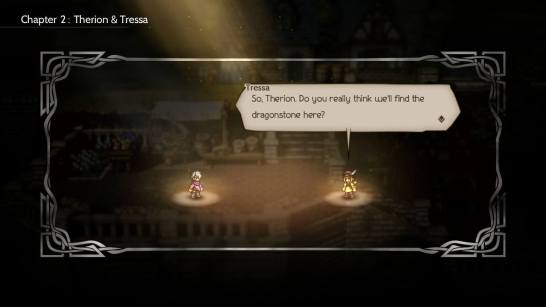 Speaking of old school, Octopath Traveler features the turn-based JRPG combat of yesteryear. I for one love that they decided to use turn-based combat because we don’t get many of those types of games anymore. Not only is it turn-based but it is also robust. You can have four of your characters in the field at any given time (if you want to switch out characters, you must do so at the tavern in towns). Each character uses their own weapons and skills. Some characters can use the same weapon type as others, i.e. bows, spears, swords, etc., but all eight have their own playstyles, weaknesses, and strengths. It is good that the game encourages you to recruit all of the characters but it is fun to mix and match them to make your team stronger.

As stated above, the combat is really robust and contains many levels of strategy. Whenever you encounter a new enemy, you must find out its weaknesses, e.g. fire, ice, or lightning attacks or simply a sword, axe, or bow attack. This is crucial since an enemy’s defense is high until you break their defense. This is represented by a number in a shield shown during combat and you must exploit that weakness until they break. When an enemy is broken, they are essentially dazed and can’t act for a whole turn afterwards. This is the time to strike as their defense is at its lowest and you can deal some pretty high damage. You can break an enemy faster and deal more damage by using Battle Points (BP). BP are points your characters receive after every turn and you can use them to strike multiple times with a physical weapon in a single turn or supercharge an elemental attack to deal large amounts of damage. The break and BP systems combine to give the combat a layer of strategy not seen in previous JRPGs and make it one of the most compelling systems I’ve ever played. 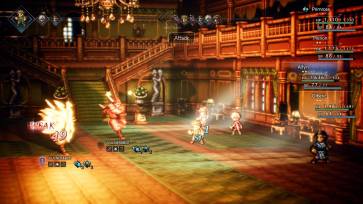 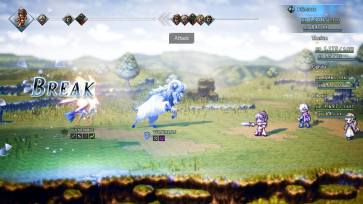 When an enemy breaks. 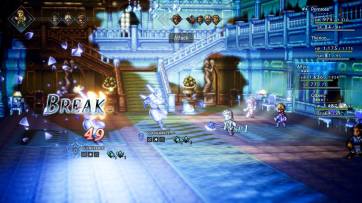 I included two pictures of this because it’s always nice to break an enemy.

There is one problem I have with it, though. The status effects or boosts aren’t clearly communicated to the player. Symbols appear when an enemy uses a buff or puts a status ailment on one of your characters. It is oftentimes unclear what your character is suffering from and you can’t figure it out right away. I’m sure I’ll learn what all the symbols mean through trial and error but it would be nice to have an easier way to know what ails my characters at a given point in a battle.

Your characters will level up by gaining experience in battle. These level ups grant you the standard health and magic bar increases but will also award you with Job Points (JP). You can spend JP to unlock new skills and abilities for each character. These include new attacks, spells, and support actions. In addition, after unlocking so many skills, you can equip support skills. Support skills are usually passive and can’t actively be triggered. They range from reducing the number of random encounters while exploring to striking an extra time every so often during combat. I don’t think I’ve reached the pinnacle of character progression though since there is still a grayed-out section in the menu. I think I know what it is but I will find out for sure soon enough.

At first glance, the game looks like it has leaped straight out of the 16-bit area. It has 2D character sprites instead of 3D models set against pixelated landscapes. Upon further inspection, however, you can see that modern techniques have been applied to the pixels. Trees have shadows, the water looks beautiful, and everything sparkles and shines. This is the HD-2D look that Square Enix touted leading up to the game’s release. Ocopath Traveler looks like how you remember those old games. It delightfully plays with your nostalgia and the game pulls it off wonderfully. I like everything about it from how the characters move to the map to all the scenery you encounter on your travels throughout the game. 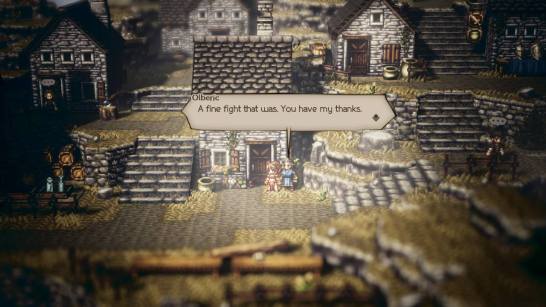 Always mildly amusing to challenge an old person to a fight with Olberic. 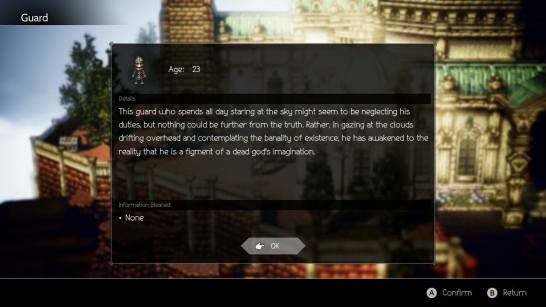 Now this is just funny.

All of the visuals are supported by one of the most wonderful soundtracks I’ve ever heard. The character themes do each one justice and the tracks that play while exploring towns and dungeons are wonderfully done. The battle themes are all fantastic too (the battle theme changes depending on your location in the world and whether it’s a boss battle or not) and they add an epic sense of urgency to every battle. I can’t recommend the OST enough and I hope everyone takes the time to listen to a few selections from it.

For the most part, the voice acting is pretty good throughout. Major scenes are fully voice while other scenes feature one or two spoken lines that convey the gist of what the character is saying. You have to read the text to get the full meaning. You can switch between English or Japanese voiceovers at any time (I think a few other languages are available too). My favorite main character voice is Olberic as he conveys the sense that he takes everything, from the important to the mundane, seriously. I have to give a shout out to whomever did the voices for the side characters Heathcote and Helgenish. Both characters are superbly acted and helped make their scenes more compelling. I can’t decide if I like H’aanit’s talking style as it seems to be a mix of proper English and German verb conjugations. It’s weird, I can’t really explain it. It has more to do with the actual writing than the voice acting.

Well, those are my thoughts and experiences thus far with the game. If you were a fan of the 16-bit era of JRPGs (or any pre-2005 JRPG for that matter) then I see no reason why you wouldn’t like Octopath Traveler. Although there really isn’t any camaraderie among the group of travelers, the visual presentation, OST, and battle system all make it a compelling title thus far. I will hopefully finish the game within the next couple of weeks and be back with a full review.

Thanks for reading and let me know what you think of the Review Preview format! Join me next week as we get ready for adventure with Captain Toad!