“This Work is Probably a Fiction…”

These are the words that appear when you first boot up the game. What these words indicate, right from the start, is that history itself will be this game’s playground. And what a playground it is. George Washington, Manuel Godoy, Giuseppe Piaggi, Johann von Wöllner, and even Napoleon Bonaparte all make an appearance. The Council is essentially historical fan-fiction (as far as we know) and it spins a marvelous tale of intrigue and deception with a fair dose of mystery.

You play as the Frenchman Louis Mauras de Richet. You and your mother, Sarah, are members of the secret society The Golden Order. The Order deals with the occult and acquiring antiquities among other things. The game opens with Sarah and Louis collecting the book Al Azif from a dubious middleman who was in the process of murdering them. It turns out he was trying to sell the book to someone of great importance. Sarah vows to discover the buyer’s identity and the scene ends. Two months go by and Louis is summoned to the island of one Lord Mortimer to help find his mother who has gone missing.

After arriving on the island, Louis quickly discovers that finding his mother will not be an easy task. Not only must he conduct an investigation into his mother’s whereabouts but he must also navigate his way among some of the most famous people of the day (all mentioned above). It seems Lord Mortimer likes to call the most powerful people to his island for conferences where he proposes special projects. Given that it’s January 1793, the special project most likely revolves around Revolutionary France (based on the guestlist and the time period). I can’t say that for certain as I’ve only played the first two episodes but I think it’s a safe bet. Louis, despite only being on the island to look for his mother, gets tangled up in the power plays and intrigue relatively quickly. While picking sides and allies, Louis soon discovers that there is more than meets the eye on Lord Mortimer’s island.

This whole scene in Episode 1 was great.

Almost immediately upon setting foot on the island, you must choose one of three classes for Louis: Occultist, Detective, or Diplomat. Each class offers different skills (e.g. science, politics, psychology, manipulation, etc.) that can be used while exploring the game world and talking to other characters. Each class also has many pros and cons that you will discover while playing. Worry not, though, as The Council is designed to allow many different ways to clear obstacles if you do not have the proper skill to easily accomplish a task. It will take extra effort to do so but just know there are multiple ways to get to the same end. In addition, no matter what class you choose at the outset, you can still acquire the skills in the other classes. The only downside is that they will cost more points to acquire, however. 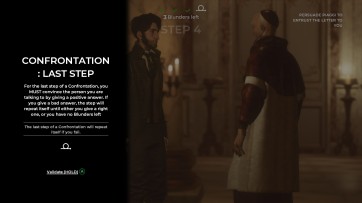 You will use your skills in a variety of ways: solving puzzles, interacting with objects, and talking with people. The puzzles could range from something as simple as revealing a hidden message to discovering how a locking mechanism works or solving a riddle involving multiple Bible verses and works of art (that was a memorable one). As I said before, what skills you have will determine how easy or difficult the task before you will be. I really doubt you will have all the skills necessary to get the answer quickly or easily but the game always does provide a way forward. You must be vigilant and explore your environment for any and all clues. Some puzzles require you to think a little bit about all of the pieces that have been presented. No puzzle will take you hours to solve (unlike Thimbleweed Park) but there is definitely a level of challenge to each puzzle.

There is no combat in The Council. Instead, there are Confrontations. Confrontations are where your skills will have the biggest impact. These events occur when your character, Louis, talks with the other guests on the island during important moments. During a Confrontation, you have a certain number of steps whereby you must choose a response based upon what the other character has said. If you pick a response the NPC doesn’t like, you commit a Blunder. You can commit only a set number of Blunders per Confrontation so be careful. Your skills are very handy during this as they can lead to success faster than just choosing a standard answer. The catch is that each time you use a skill, you consume Effort Points. You have a set number of Effort Points based on the skills you have, how many Amber pieces you’ve found, and the Traits you’ve unlocked (more on those later). If you consume all of your Effort Points during a Confrontation, you receive certain negative attributes that impact the rest of the interaction. There are items you can use to restore Effort Points (Royal Jelly) and cure negative attributes. These can be found lying around the island. In my experience, these are generously placed so they can easily be found by those who explore every nook and cranny. 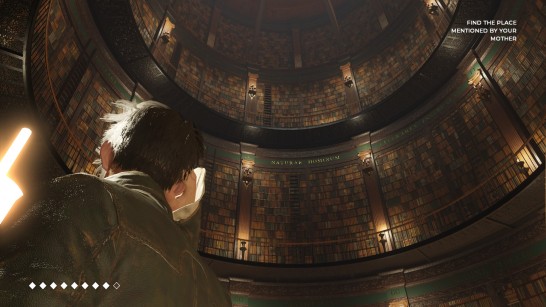 That’s quite a library.

Sorry, I was admiring the wall panel.

There are two other things you must look out for when partaking in Confrontations (and when talking to NPCs in general): Immunities and Vulnerabilities. From what I can tell, each guest on the island has two Immunities and two Vulnerabilities (since the game is episodic, that fact may change). These are a part of each character’s personality and play a large part when you are talking to one. An Immunity means a character isn’t affected by a certain skill and will rebuff you if you use it on them. In addition, if you run headlong into an Immunity, you become fatigued which means each skill requires more Effort Points (you can fix this by using a Golden Phoenix, another item). As for Vulnerabilities, if you use a skill and a character is vulnerable to it, then you not only receive more information from that character but you also get an Effort Point back. You can discover each characters’ Immunities and Vulnerabilities by simply encountering them in conversations or you can learn them by reading documents or finding objects throughout Lord Mortimer’s manor. Immunities and Vulnerabilities are the most interesting aspects of The Council’s gameplay and make interacting with NPCs much more engaging than usual.

There is no guarantee of success for each Confrontation and puzzle. Whether you succeed or fail to gain an important piece of information from each Confrontation or puzzle will result in Louis receiving a Trait. Traits can provide positive benefits (like extra Effort Points or additional points toward certain skills) or negative effects (like skills costing extra Effort Points). Traits are permanent and add an additional layer of risk to the game. It definitely pays to use your skills whenever you can, to explore and discover Immunities and Vulnerabilities, and to pay special attention when walking around the island. Almost everything you find can help you avoid receiving a negative Trait. 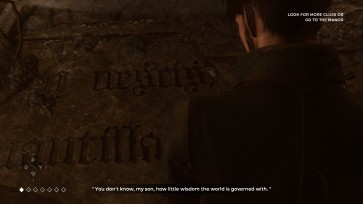 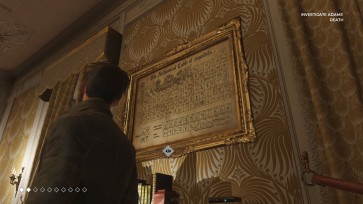 As for the story, I highly enjoyed what has been revealed thus far. Nothing really explosive happened in the first two episodes nor have many of the mysteries been revealed yet but I will forgive the game since there are still three episodes to go. The game is obviously divided into episodes with each episode divided further into chapters. The game emphasizes choice and thus different outcomes can occur within a chapter. At the end of each chapter, the game reminds you of this fact by revealing a chart that shows what other actions you could have chosen and which paths could have been taken should you have chosen differently. On one hand, I wish The Council didn’t do this as it reveals alternative ways to accomplish different tasks which could spoil a second playthrough. On the other, it does make you think about how obvious your choices should have been after the fact. Hindsight is 20/20, after all.

I don’t know what the game was doing here…

This hole was last seen in Sparta.

The Council does have a few problems, however. The graphics are pretty good (especially people’s faces) but there are some clipping issues but they are relatively minor. Back when the game first came out, I encountered several bugs including one that was game-breaking. I stopped playing for a few weeks because of it but I didn’t have any of those problems again when I picked it back up. This leads me to believe that the developer has fixed those issues with patches. In addition, the voice acting is, by-and-large, very good. It does require a little cognitive dissonance on the player’s part because Louis is French but he has an American accent whenever he talks. It’s a small issue that is easily overcome by the fact that the story is so good. Also, there is sometimes a time limit to respond during conversations with other characters but this can easily be overcome by simply opening the menu. This gives you plenty of time to think about your dialog choice without worrying about the time limit. All of these issues are relatively minor (the time limit workaround will be kind of a big deal to certain people, I guess) but that doesn’t change the fact that they are present.

If you are a fan of story-driven narratives with an ample number of choices with little or no combat, then The Council is for you. If gameplay is the only thing you look for in a game, then I suggest you steer clear. I absolutely loved my time with The Council and I can’t wait to play the remaining three episodes when they come out (the third one had just come out when I was writing this). The famous characters, the historical fan-fiction story, the robust skill system, and its RPG approach to conversations really won me over. I hope the developer, Big Bad Wolf, maintains the level of quality shown so far (that’s a problem with some episodic games) and I look forward to seeing how the story progresses in the hopefully not-so-distant future.

Thanks for reading and tune in on Friday for another review!