In 2018, I gave Captain Toad: Treasure Tracker a Pretendie for Most Fun Game. Therefore, I was excited when Nintendo revealed that there would be DLC for the game called the Special Episode. I have since purchased said DLC and I have to say that it is just as fun as the base game but it doesn’t feature anything new besides two additional game modes and a handful of levels. It isn’t necessarily a bad thing but I had hoped it would be just a bit more different than the original game. 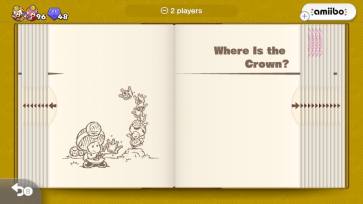 As I said above, the overall concept of the DLC is the same as the base game. You play through a level collecting things (like diamonds) while trying to get to the end where there is a crown (it was a star in the main portion of the game) waiting to be taken. Each level also has a bonus objective that reveals itself only upon completion of the level.

There are eighteen new levels in the DLC although a few of them are just repurposed ones from the base game. Each level can be spun around to look at it from a different angle so you can find all of the collectibles. Enemies can once again be stunned by clicking on them to keep them away from Toad as you guide him through the level. The biggest problem I had with the Special Episode is the fact that Nintendo didn’t make it any easier to play in TV mode. The cursor is still moved around with the finicky motion controls. It is much easier to play the game in handheld mode since you can tap the touchscreen with your fingers.

There are two new game modes that are used for the majority of the levels: Crown Capture and Boo Spotting. Crown Capture is where Toad must collect, within a time limit, a series of crowns that spawn at different points on the map. In Boo Spotting, Toad must use a cherry to duplicate himself in order to defeat Boos (ghosts) with his headlamp. It is possible to defeat Boos with one headlamp but it takes much longer. Neither game mode is very challenging (unless you insist upon completing Boo Spotting without the cherry) but they are fun nonetheless.

There are a few levels that don’t involve Crown Capture and Boo Spotting, however. I had the most fun with these levels actually. These levels were original creations and not ones repurposed from the base game. The last level in particular is challenging since it is a combination of the Mummy-Me and Toad Brigade modes from the base game. Essentially, you have to find and lead the three other members of the Toad Brigade out of a maze while being chased by Toad’s evil doppelganger. I’m actually still working on completing that level’s bonus objective as we speak.

As far as the overall value of the Special Episode goes, it is short but cheap ($5.99 on the Eshop). I must admit that I wish Nintendo had simply made a proper sequel to Captain Toad: Treasure Tracker. Hopefully, that’s in the works. I would be extremely happy with that. The Special Episode does add the ability for all of the levels (including those in the base game) to be played in co-op. I think this feature is more geared towards younger players since, in my experience, none of the levels are hard enough to warrant the need for a second player. Regardless, I am glad that Nintendo added this option in the DLC for those who may have wanted it.

Captain Toad: Treasure Tracker Special Episode is a fun addition to a very fun game. It features the same gameplay as the base game although it does come with two new game modes along with the ability to play co-op on every level. If you enjoyed the base game, then you will definitely enjoy this. I sincerely hope that this isn’t the end for Captain Toad and that Nintendo will continue the series with a new game in the not-so-distant future.