Author’s Note: You can find the video version of my Biased Review here. I hope you all at least watch a little bit of it since I believe it is the best video I’ve ever made. Enjoy!

Is a man not entitled?

You know, it’s funny when I think about it; I didn’t even know about BioShock until the day it came out. It’s a miracle then that it has become one of my favorite games of all time. I found out about the game on release day from a friend who said he was excited for it. On a whim, I bought it, brought it home, and watched my friend play it for a few hours. After he left, I decided to give the game a go and it turned out to be one of the best games I have ever had the pleasure of playing.

BioShock is a first-person shooter with a few twists to its gameplay. For starters, all of the weapons can be upgraded using special machines found in the levels. There is a fairly large assortment of them ranging from a pipe wrench to a homemade chemical thrower that can act as both a flamethrower and a liquid nitrogen dispenser. The weapons can be easily accessed using a radial wheel thus it’s fun and easy to use a variety of weapons in combat. 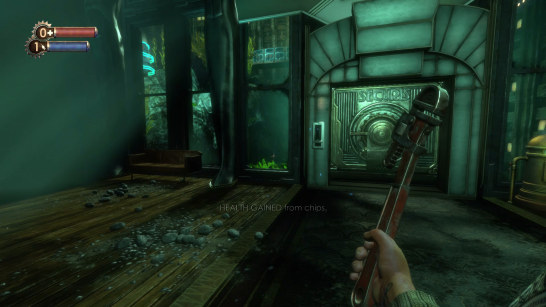 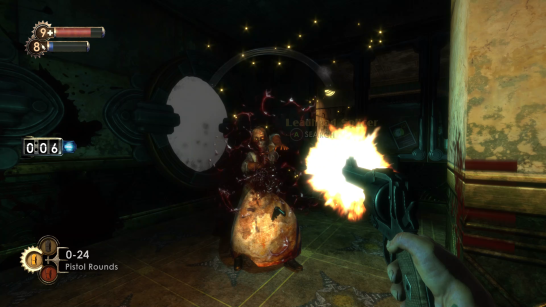 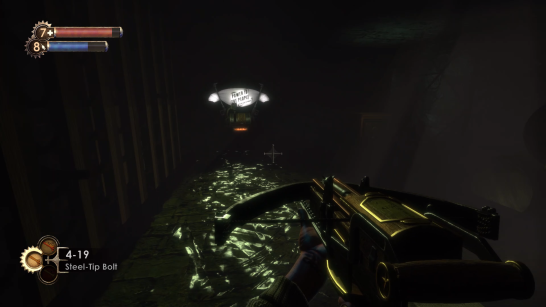 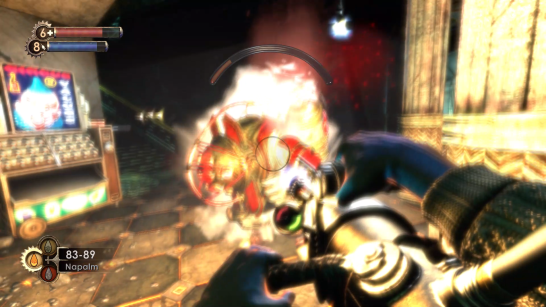 What really sets BioShock apart from other run-of-the-mill shooters are Plasmids. Plasmids essentially give the player special powers and make combat all the more exciting. You can use Plasmids to burn, freeze, or shock opponents or you can even send a swarm of bees after them. Plasmids spice up the combat by offering a variety of different ways to approach any given situation. In certain circumstances, Plasmids can even be used for extra damage, i.e. shocking an enemy when they’re standing in a pool of water.

Plasmids can even be useful outside of combat. They can be used to open up new areas to explore. As an example, Electro Bolt, the Plasmid used to shock people, can be used to unlock doors or overload turrets and cameras while Incinerate can melt a mass of frozen water blocking your path. 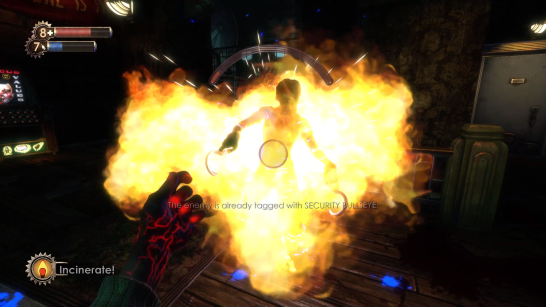 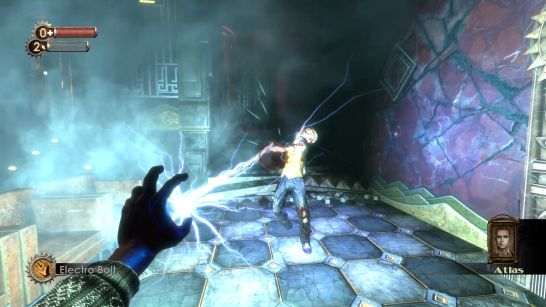 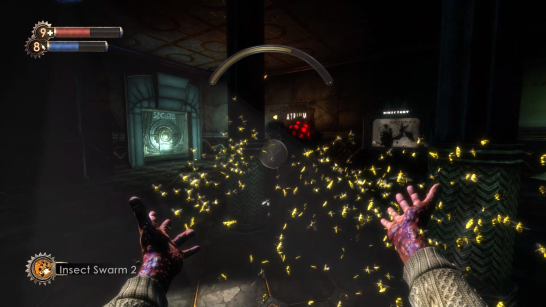 Plasmids, in case you were wondering, are possible through the discovery of substances called Adam and Eve. Adam is accrued by defeating enemies called Big Daddies and then capturing the Little Sisters which accompany them. I won’t go into detail about either of them (for fear of spoilers) but it’s enough to know that you can get Adam from them. Adam can be spent at vending machines found around Rapture to get new Plasmids, unlock more slots in which to put Plasmids, or to get what are called tonics. Tonics assist the player by granting special buffs like being able to walk around silently or they can help you in practical ways like making hacking easier for example. You start the game with two Plasmid slots and equipped Plasmids can be changed at Gene Bank machines. It’s really fun to purchase Plasmids not just because you get a new power to use but because a humorous promotional video accompanies each one. 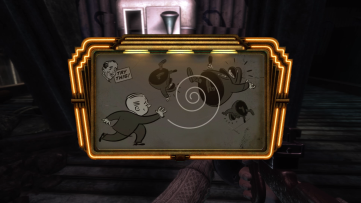 As for the enemies you’ll be squaring off against, there are quite a few of them. BioShock does a good job of introducing new enemy types (called splicers) on a regular basis during the first half of the game. The second half, to my recollection, doesn’t introduce any new enemies but it is fun nevertheless. BioShock is interesting in its approach to combat since you won’t face waves of enemies (although there are a few instances of that). You will usually just come across one or two enemies at a time wandering around the levels.

There are also some light horror elements where enemies will pop out of doors or will pretend to be dead and then change position when you turn your back. Once you do engage an enemy in combat though, there’s no telling what might happen. The fighting could draw the attention of other opponents who will join in the fun. Or you could be like me and be in the middle of a fight with two or three splicers, accidentally hit a Big Daddy with a stray bullet, and suddenly have to deal with him and the other foes. Encounters like this keep the combat interesting in a way that I’ve never really seen in any other shooter.

Although I love BioShock, I do have a few issues with it. For starters, all of the machines can be hacked using a mini-game where you must guide an electric current from one point to another. This, and you need to trust me, gets fairly tedious by the end of the game. BioShock also has a messy audiovisual presentation in certain parts. This is especially true if an alarm is going off, a Big Daddy is making a lot of noise nearby, and if you’re fighting enemies all at the same time. It can be a bit much to hear all of that racket at once. It’s also sometimes hard to tell where all of the sound is coming from. One last thing I have to mention here are the glitches. I played the game through the BioShock Collection so it might just be a problem with that version (since I don’t remember it being in the original release) but the menu wouldn’t work properly. The cursor would simply move downward of its own accord and it would be a real bitch to get it to the right spot. Additionally, I would sometimes encounter bodies that would just slide across the floor in a straight line. This was a big problem in the Medical Pavilion of all places. Maybe the bodies just wanted medical attention? I don’t know but it was weird seeing them do that. Again, I don’t remember this being an issue in the original version so it might just be a problem with the collection on modern platforms. Just be aware of these issues if you want to play BioShock using that format.

And now we come to the three reasons why I truly love BioShock; its story, its setting, and its characters. It is truly ironic that I love BioShock’s story but I won’t say much about it. I don’t want to spoil anything. Why don’t I want to spoil anything, you ask? I don’t want to spoil anything because one of my friends (not the one mentioned above but a different one) spoiled the story for me when I was playing through it the first time. As a consequence, I quit playing the game and didn’t return to it for many years. I don’t want that to happen to any of you thus I won’t say much about it. You should go into this game knowing very little about the story in order to get the most out of it.

Although I said I won’t say much, I will give you all a rundown of the beginning of the story. You play as Jack who, after initially uttering a few lines, will become a silent protagonist for the rest of the game. He is on a plane that crash-lands in the middle of the Atlantic. He is the sole survivor of the crash and he notices that there is a lighthouse close at hand. He swims towards it, boards a bathysphere (basically a submarine), and is transported to the underwater city of Rapture built by a man named Andrew Ryan. Jack quickly discovers that things have gone horribly wrong and thus the story begins. The story explores several philosophical themes and that’s all you will get from me on this subject. Just trust me when I say that it is a good one. 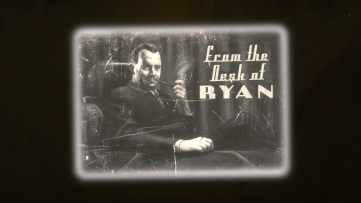 I will, however, go into detail about the game’s setting; the underwater city of Rapture. It is one of the best locales I’ve ever seen in a video game. It is almost a character unto itself. Although it is mostly destroyed, its crumbling facades offer hints of its former glory. The destroyed remains of the city almost turn BioShock into a horror game. You will journey through multiple sections that not only provide environmental variety but also logically explain how a city could exist on the bottom of the sea. My favorite area is Arcadia because it’s a beautiful forest that produces all of the oxygen for Rapture. There were times when I would stop and simply marvel at the wonderful architectural design. Maybe that’s just because I’m a big fan of the art deco style. Regardless of the reason, the design really resonated with me. 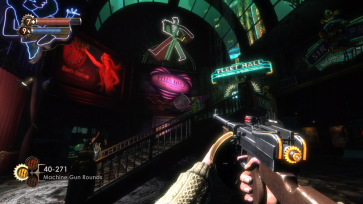 But, as awesome as Rapture is to look at, it would be nothing without its citizens. As I said before, Rapture is mostly in ruins and most of its denizens are either dead or have gone crazy by the time our protagonist Jack arrives on the scene. Most of the backstory of the city is told through audio diaries that can be found scattered around Rapture. Each and every one of these diaries features superb voice-acting and provides a window into a time when Rapture wasn’t a ruined metropolis. Not only do the characters featured on these diaries give insight into the history of the city but they also have more character development than some protagonists go through over the course of a whole game. You will hear from some characters through a diary early on in the game and then hear from them again on another one later on and they have completely changed their perspective of a certain situation or person. I know I sound vague here but I’m doing it for a good reason. I don’t want to give anything away. It’s best if you hear these diaries for yourself as they are an integral part of the experience. 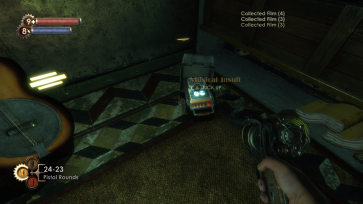 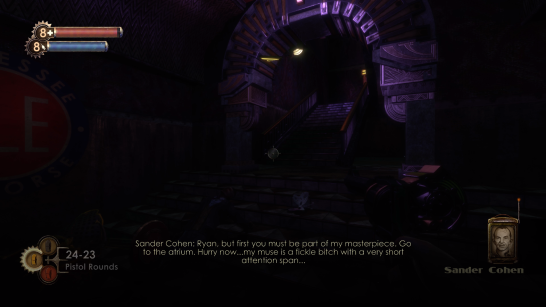 These audio diaries aren’t the only way to hear from the citizens of Rapture, though. A few key people have survived the city’s decline and interact with Jack throughout the game using a two-way radio. I will break my rule about not revealing too much about the story here to say that my absolute favorite character in the whole game was none other than Sander Cohen. He is a sociopathic artistic type who never gives a dull performance. He essentially puts the whole story on hold so you can help him finish his masterpiece. I hope that, should you choose to play BioShock after reading this review, you will look forward to when Sander Cohen appears on the scene.

BioShock is a great game. It’s an FPS that spices up its combat with upgradeable weapons, superpowered Plasmids, and frenetic enemy encounters. The hacking does get tedious and it can be audio-visually messy at times but these issues are greatly overshadowed, however, by its story, its setting, and the superbly voiced characters. If you like a good story and atmosphere to go with your shooting, then BioShock is the perfect game for you. Heck, if you just like a good story then look no further than BioShock. Even if you don’t like either of these things, I ask that, should you have the opportunity to do so, you at least try out the game since it is truly a one-of-a-kind experience.

Thanks for reading! Do you enjoy BioShock as much as I do? Or maybe not so much? Even if you don’t, I would still love to hear your feedback. I’m always curious to hear a dissenting opinion. Once again, thanks for reading!