Video version can be found here.

This review for Astral Chain has been the most difficult review I’ve ever written. Not because I don’t know what to say but because it’s never been this hard to settle on a final score. Spoiler alert: the final score will be an eight out of ten. It took a lot of thought to get to that score and I’m not sure that it’s the right one in the end but that’s what the game is getting. Hopefully, I’ll be able to explain exactly why this decision was so difficult. Whether I explain it well or not, I hope you enjoy!

Let’s start with the weakest part of the game: its story. I’ve finished the game and I still don’t know exactly what the narrative was all about. In particular, I couldn’t tell you what the main antagonist’s goal was. If you go and watch all of the trailers for Astral Chain, you will essentially know as much about the story as I do right now (or at least you will know ninety percent of it). And I’ve finished the game! I was very disappointed with the story but it surprisingly didn’t stop me from enjoying Astral Chain.

The setup to the story is that humanity is on the brink of extinction due to attacks from beings known as chimeras. Chimeras jump out of interdimensional gates to attack and kidnap humans. The last remnant of humanity has retreated to an artificial island in the middle of the Pacific Ocean. The police of this island are charged with keeping the chimeric threat at bay. You get to play as a member of the police force and this is the second gripe I have with the game.

At the outset of Astral Chain, you are given the choice to play as a male or female half of a set of twins. I have no problems with this choice. I do, however, have a problem with how the game handles your choice. You see, the twin you pick becomes a silent protagonist for the rest of the game. That twin will not utter a single line from that point onward.

Protagonist is perhaps too strong a term in this instance since the twin you didn’t pick will essentially do all the talking for you. Arguably, that twin is the main character since they have all the lines. This is made even worse by the fact that there are several moments throughout the story that are obviously supposed to be emotional but they fall flat because the player character doesn’t say anything. He or she simply makes guttural noises and grunts. I’ve played games with silent protagonists before so I know it can work if done properly but that can’t be said of Astral Chain.

This silent protagonist problem is made even worse since your twin is probably the most annoying and stupid character I’ve ever seen in a video game. There were times when I literally facepalmed because I couldn’t stand hearing my twin talk. That’s how bad their lines were. I could have gotten behind Astral Chain’s character selection scheme if it wasn’t for the bad dialogue. Long story short, the narrative was severely hampered by the silent protagonist and annoying, stupid twin.

Astral Chain is a third-person action game developed by Platinum Games. Since you play as a police officer, the game is divided into Files (essentially chapters). These files mostly consist of exploring a semi-open area filled with side content that becomes a corridor filled with combat encounters towards the end. The side content ranges from somewhat exciting stuff like assisting other officers with police work to cleaning up red matter. Red matter is essentially the material left over from a chimeric attack (more on how you clean up red matter later). A few side cases were fairly memorable (like the ones with Officer Carlos) while others were just mundane. This is my biggest problem with the side content in the game; some was great while the rest was just plain boring. The portions where you must investigate crime scenes were particularly boring since there really wasn’t much to it except using IRIS (an embedded eye scanner) to find highlighted clues.

Your combat skills will be graded on certain difficulties.

I actually quit playing Astral Chain about halfway through because I had gotten tired of the structure of the game; running around a semi-open area completing side content of varying quality and then fighting a bunch of chimeras at the end. I had to step away from the game for a few weeks. What makes this even more interesting is the fact that, once I started playing the game again, I had an absolute blast. The only conclusion I can make is that the Files in the middle of the game weren’t that good. This leads me to believe that these Files in the center could have been cut or pared back.

The combat is where the lion share of the fun is thanks in no small part to the Legions. Legions are captured chimeras which a select few people can control. Luckily, your player character is one of those people thus you get to use the Legions. What makes Astral Chain special is the fact that you can control both your character and one Legion at the same time. This may sound complicated but it was really intuitive and easy to do. Platinum Games obviously put a lot of thought into the control scheme and I was really impressed by it.

Although there are many fights in the human world, you will spend the majority of your time fighting in the Astral Plane. Side note: The Astral Plane levels didn’t have much variety to them. This is the home of the chimeras and you will have to take the fight to them fairly often and the Legions are quite useful here. There are several different types of Legions and it was fun discovering how best to use each one while fighting chimeras. Each Legion can be upgraded in the menu; e.g. attack and defense can be increased, new skills and combo attacks can be learned, etc.

The enemy designs were all fantastic and each new enemy I encountered kept the combat interesting. The bosses were a lot of fun although a few of them were just rehashed versions of the same boss (especially in the middle portions of the game). I will warn you now that the final boss is no joke so make sure you are adequately prepared for that. The one drawback of the combat is that it is sometimes hard to tell exactly what is happening since you have to pay attention to your character, your Legion, and the enemies. This isn’t too major of an issue, though. If you ever find yourself having trouble in combat, Astral Chain offers several difficulty levels should you need to change it.

Legions are useful outside of combat as well. They can be used to eavesdrop on people, find hidden items, move heavy objects, clean up the aforementioned red matter, and even navigate to new areas. It was a lot of fun controlling Legions both inside and outside of combat. There are a few times where you have to use a Legion to solve a puzzle (usually in the Astral Plane). Although “puzzle” might be too strong a term here since none of the “puzzles” were very hard. Regardless, I really enjoyed the Legion gameplay.

Two things I absolutely love about Astral Chain are its visual style and the soundtrack. The visuals are what I guess would be described as cel-shaded and it is helped by the wide color palette. The OST is quite awesome and there is a ton of variety within it. The soundtrack is a little different than most games out there which is probably why I like it so much. My favorite piece was the Neuron HQ theme. It never failed to lift my spirits.

Two additional things I really enjoyed were the characters and the humor which go hand-in-hand. My favorite characters were Lappy the police mascot and Marie Wentz. I always made sure to do any side case which involved either Lappy or Marie. My favorite part of the whole game was when Lappy gave me a tour of the police headquarters. Kyle the Hermit, Olive, Hal, and the aforementioned Carlos were all standout characters as well. Perhaps the oddest character in the whole game was the bathroom faerie. This faerie gives you a quest in each File to find material that can be used as toilet paper. That’s all I will say about that.

It was always a joy to interact with Lappy. 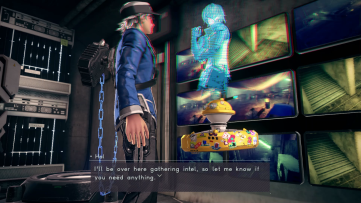 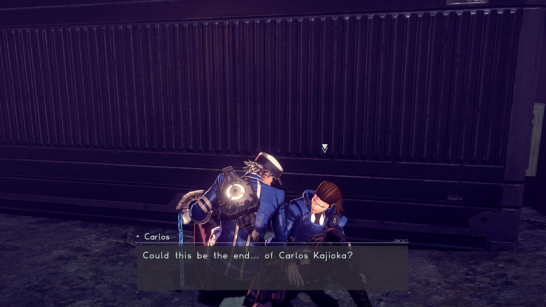 Not Carlos! Spoiler alert: it wasn’t the end.

What struck me the most about Astral Chain is how old-school its design is. It is absolutely chock-full of unlockables and customization. New color schemes for the Legions and your character, new clothing accessories, and even new voices for the IRIS can be unlocked by fulfilling certain tasks. My favorite voice is from a relatively recently released, much beloved Platinum game. These tasks are called orders and there’s a whole page in the menu dedicated to them. Once completed, these orders will yield new goodies. Just be sure to click on the order to unlock the rewards! Don’t be like me and not realize this fact until the very end of the game.

There are many different color schemes to unlock…as you can see from the five hundred I haven’t unlocked yet.

What makes Astral Chain even more old-school is the fact that these unlockables make the game really replayable. This is because you can unlock new stuff by completing Files on different difficulties. This is especially true of the harder difficulties since everything you do (including fights, solving cases, and even completing the Files themselves) is assigned a letter grade at the end. If you do well enough in the grades department, you can be handsomely rewarded. With all of these unlockables and difficulty levels, Astral Chain is practically begging you to keep replaying it to unlock new things.

Astral Chain is a very interesting game. Its combat, Legions, characters, visuals, OST, and old-school sensibilities are all fantastic. This is hampered, however, by its story, silent protagonist, annoying nonplayable twin, the overall sameness of the Astral Plane, and the side content that is hit or miss. This is why I had such a hard time grading Astral Chain. In the end, I think I have given it a fair score as it is an enjoyable game with a few major flaws.

Thanks for reading! Did any of you pick up Astral Chain? Did you love it, hate it, or did you not have any strong feelings one way or another? Let me know! I’m curious to hear your thoughts since I was so conflicted about this game.