The cast keeps on growing.

It’s a new(ish) year and you know what that means: it’s time for another Yakuza review! I don’t want to spoil my own review here but, as one commenter on my Yakuza 3 video said, “Yakuza games are always good” and, luckily for us all, that holds true with Yakuza 4. With this in mind, I will try to only talk about what is different and interesting in Yakuza 4 in this review (at least from my perspective though it would be weird if I wrote from another person’s point of view, wouldn’t it?). Without further ado, let’s get into it!

Yakuza 4 is, of course, the sequel to Yakuza 3. Though that might literally be true, Yakuza 4 is more than that; it is basically a continuation of 3 in many respects. Hear me out on this. Yakuza 3 and 4 are the two games which are the most similar to each other when compared with the other Yakuza titles when it comes to the gameplay (not so much in the story department but more on that later). The graphics of the two games are almost identical and 4 has some of the same issues that 3 had; too few save points, inventory keeps getting full too quickly, too many button presses to reach the map, and there are a ton of QTEs both inside and outside of combat. This is what I mean when I say that they are the most similar to each other and thus 4 is more of a continuation of 3 than a separate game. 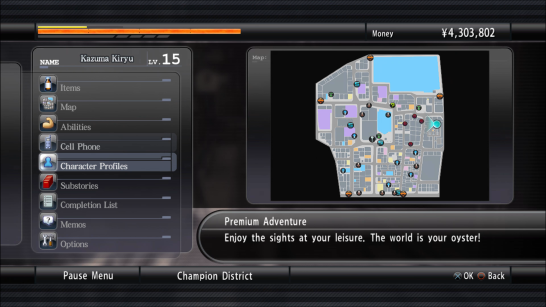 That is where the similarities end, however. What really sets Yakuza 4 apart from 3, and really any other entry in the series, is its story. The good people at Ryu Ga Gotoku really upped the ante when it came to the story in 4. That’s because there’s not one, not two, not three, but four protagonists in Yakuza 4. Yes, you read that right. There’s four, count ‘em, four protagonists. Three of which are entirely new characters. There’s Akiyama, the lender with an unusual way of loaning money; Saejima, the convict who wants to discover the truth behind his incarceration; Tanimura, a cop who is searching for the reason behind his father’s death; and, last but certainly not least, our boy Kazuma Kiryu, who, for all intents and purposes, just wants to be left alone on Okinawa so he can raise the children of Morning Glory Orphanage. 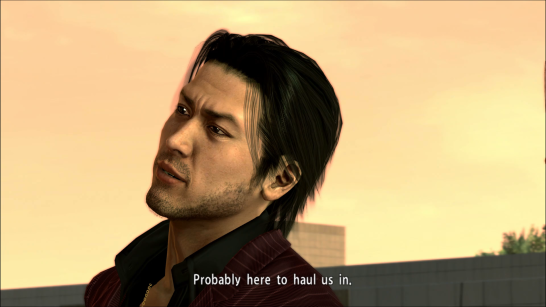 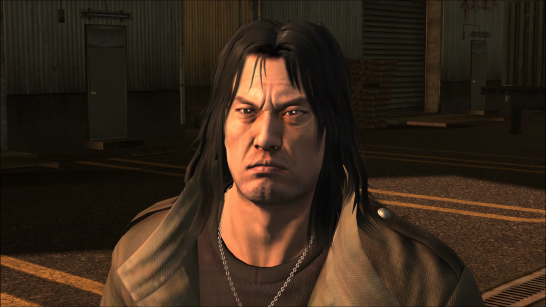 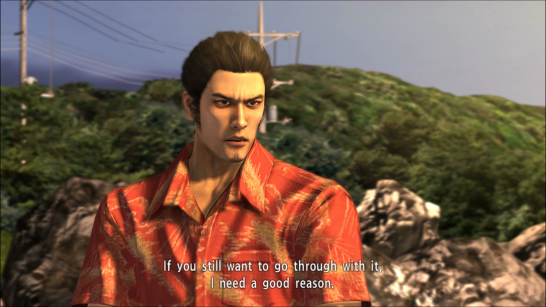 I must admit that it was a little daunting at first when I discovered that there were four protagonists in Yakuza 4. I was concerned because I thought that the story would either be too long, too convoluted, or that certain characters wouldn’t get enough screen time to fully explain their motivation. I should have really learned by now not to worry about the story in a Yakuza game. The good folks at Ryu Ga Gotoku know what they’re doing. Not only was the story handled extremely well in 4, despite the overabundance of protagonists, but each character had their time to shine and each one had their own story which contributed to the overall plot.

The way it works is that each main character receives their own two consecutive parts in the overall tale. You cannot switch between them freely at any given time (although that option does become available towards the end of the game). This system worked fairly well although it was weird being away from one character for too long.

Whereas Yakuza 3’s tale seemed more personal and subdued, Yakuza 4 goes the more dramatic and bombastic route. It kind of reminded me of the story beats from Yakuza Kiwami in that some of the drama in 4 was over-the-top and full of intrigue. It features a wide cast of characters (I’m not just talking about the protagonists here either) and all of them were full of life and, well, character. And yes, the story is absolutely chock-full of betrayals, twists, turns, and jaw-dropping moments as any good Yakuza game is. And it all builds to one of my favorite final boss battles of the whole series. I won’t say what it entails but it fits the game perfectly.

Perhaps what surprised me the most about Yakuza 4’s story is the fact that not playing as Kiryu for the whole game didn’t bother me in the slightest. I didn’t step into his shoes until after the twenty-hour mark and I kind of didn’t miss him. Don’t get me wrong, I like him as a character and all but it was nice to throw some variety into the mix. You have to remember that Yakuza 4 is the first game in the series where you can play as another character (though not the first one I have played where this was the case; 0 carries that distinction) so it was nice getting to know other characters for a change. It didn’t hurt that the other three characters are just as compelling and interesting as Kiryu (if not more so).

Not only does each character have their own storyline but they also have their own fighting style too which keeps things interesting. Akiyama focuses on kicks, Saejima uses brute strength to overcome his opponents, Tanimura can sidestep attacks, and Kiryu does his normal attacks which, if you have played the other games in this series, you should be familiar with by now. If you can remember Kiryu’s three fighting styles from Yakuza 0 and Yakuza Kiwami (and, let’s be honest, you probably don’t), Akiyama and Tanimura would use the Rush style, Kiryu would utilize the Brawler style, and Saejima would be destroying punks with the Beast style. As I said, each character’s fighting style kept things interesting and fresh although it was hard returning to a character if I had been away from them for a while since I had forgotten their moves. 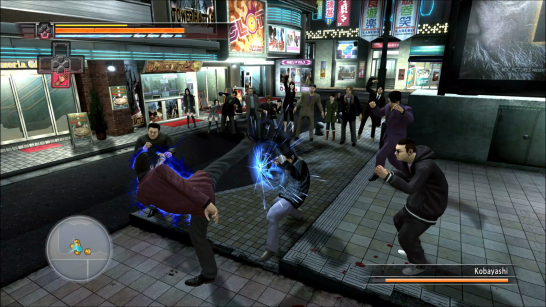 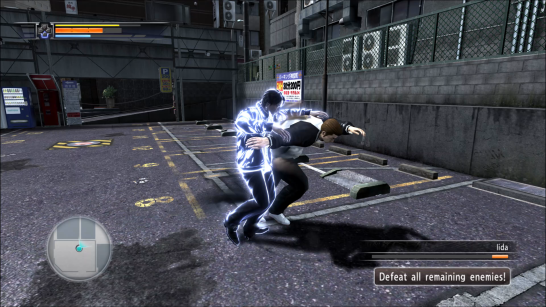 Each character can be upgraded using experience orbs. The orbs are obtained by getting experience and by gaining levels. Orbs can be spent to unlock new Heat Actions (yes, these are back once again), increase a character’s health, and to learn new moves. And, in the best news I have heard in a while, Revelations were included in the game. Revelations, in case you have forgotten, were introduced in Yakuza 3 and they entail watching a hilarious cutscene with QTEs. If you push all the buttons correctly and guess the right phrase at the end of it, the character you’re controlling will write a blog post and learn a new move. Most of the characters will use a phone to do this but, and this shows the genius of the game’s developers, since Saejima has been in jail for over twenty years, he uses a different method to record Revelations. I will resist the urge to reveal what he does here but trust me when I say that it is hilarious. 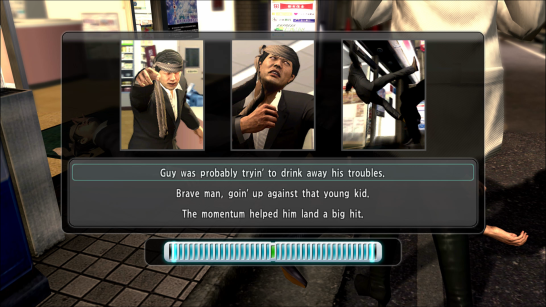 The only downside to the Revelations is that some of them are repeated across the different main characters. Although it was good that Ryu Ga Gotoku made use of them multiple times, I still would have liked it if each character had their own Revelations. Other than that, though, the Revelations were a good time.

As with any Yakuza game, there are plenty of side activities to do in Yakuza 4. I must be honest and say that I didn’t really mess around with many of the side activities (except ping pong, which was oddly addicting even though I wasn’t very good at it) since I was so invested in the main story. I did, however, love tracking down the substories. The substories in 4 were all fairly good (most were great) and they once again added some comic relief to the game. A few were about serious issues though so don’t expect them all to be funny. You won’t regret spending some time with the substories. What really makes the substories so interesting in 4 is that many of the them connect together to form larger side narratives. Akiyama has a bunch of substories involving his business; Saejima must help a young kid find his sister who has been taken by loan sharks; Tanimura must assist a civic group looking to keep the peace while also tracking down a smuggling organization; and Kiryu has to beat up members of various gangs to uncover a plot against him. This is notable to me because it reminds me of the larger side activities which have their own subplots in the other Yakuza games (think Real Estate Royale in 0 and Cabaret Grand Prix and Clan Creator in Kiwami 2). It would seem that this idea of having large subplots set within the larger narrative first started with Yakuza 4 (4 came out before both 0 and Kiwami 2). That’s what is so great about playing these games now. I get to see how the series progressed and changed over the years. I hope everyone reading this will have as much fun discovering the series’ lineage as I am. Please remember that, by reading this, you are legally bound to start playing these games. So, you’d better have fun with it. Or else.

Before I go, I do want to mention the fact that even though there are four protagonists, the game only takes place in one locale: Kamurocho. If you’ve played any Yakuza game before, you’ll know Kamurocho. The map is mostly the same except for a few additions. Most notably, you can now travel along paths both above and below the city. Although it did add some verticality to the map, I never used these extra paths unless I was forced to by the story. Especially since I kept getting turned around in the underground portions. 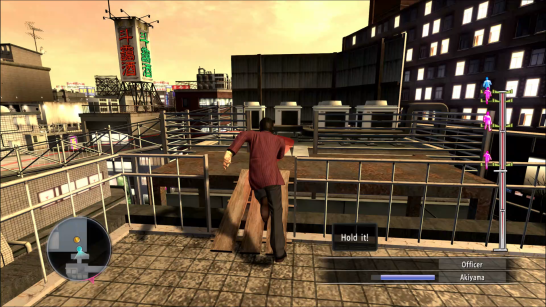 In what should come as a surprise to no one, I have once again reviewed another great Yakuza game. Although Yakuza 4 has some of the same problems as 3, it more than makes up for it with its bold story with four protagonists and substories which have their own subplot. The additions to Kamurocho (the underground and rooftop pathways) were appreciated although I didn’t use them very often. The Revelations were a lot of fun as always even though the same ones were used for different characters. Once again, it was a joy to play yet another Yakuza game. It’s a testament to how good this series is that I’m not tired of it yet after five games. If you still haven’t tried this series out, what are you waiting for? You need to play these games now. They’re all a blast. Also, keep in mind that you’re now legally obligated.

Thank you for reading! Just FYI that Yakuza 0 is now available on Xbox One. This is the first time that a Yakuza game has appeared on an Xbox console. What makes it even better is that it is included with Xbox Game Pass so if you have that then all you need to do is download it. It is also out on PC (through Steam) and, of course, all the mainline games are now on PS4 so there really is no excuse not to play Yakuza at this point. Do it. You won’t be disappointed.