Much has been said in recent months about Sony’s unwillingness to allow crossplay with Microsoft and Nintendo’s consoles. Indeed, the fervor over its stance reached a peak during E3 this year when Fortnite players discovered that their accounts made on their PS4’s couldn’t be used on the Switch. Although I agree that Sony should allow crossplay, I think it is important to look at the potential reasons why Sony won’t allow crossplay. I don’t have any insight into Sony’s decision-making process so take my views with a grain of salt. Maybe there is a sliver of truth in what I say and Sony isn’t blocking crossplay just to stick it to its rivals.

One reason Sony might be blocking crossplay is because it doesn’t feel the need to have it. With 80 million consoles sold, they have the largest install base of any console this gen by a fair margin. In fact, Sony’s executives have openly stated this is the main reason why they haven’t allowed it to happen. They feel that PS4 owners have more than enough players to play games with and therefore don’t need to expand the playerbase by adding other platforms. The suits at the top would prefer to keep all PS4 players playing with each other, and not with the owners of Sony’s rivals’ consoles, since they have the numbers advantage.

The fact that Sony doesn’t want to help its rivals, with their smaller install bases, factors into this line of thinking too. If Sony were to allow crossplay with Microsoft and Nintendo, that would allow games that may otherwise have a low playerbase on their consoles to increase their numbers with PS4 players. This would then have the effect of helping Sony’s rivals. Sony obviously doesn’t want to give a hand to its rivals by bolstering the number of people that can play games with Xbox One and Switch players. This is a solid strategy at first glance but I would caution those at the top of Sony’s corporate ladder that the numbers advantage may not last forever. Everyone must keep in mind that a new console generation is just around the corner and the tables can turn. Just ask Microsoft circa 2013 and Sony can even ask its own 2006 self about how quickly fortunes can change. Sony must be careful or it may find itself wishing it had allowed crossplay to happen when it had a stronger hand. It could find itself in a tougher console war next time around.

If you may recall, Sony’s PlayStation Network was hacked back in 2011 which lead to millions of accounts being compromised and the service being down for several weeks. I’m not a technical genius and therefore do not know the ins and outs of connecting two (or three or four) separate multiplayer-centric services together but I imagine Sony may be leery about the prospect. The linking of all these services may create vulnerabilities in the system that hackers could exploit. Sony, I’m sure, doesn’t want a repeat of the events that occurred back in 2011 and probably has extensively looked into this possibility (again, I’m talking out of my ass here since I don’t know or understand the technical side of this issue). It will probably do whatever it takes, including blocking crossplay, if it would mean better security for its network.

The O’Jays had it right when they sang “Money money money money MONEEEYYY!” It’s always about the money. Sony probably won’t budge from its stance on crossplay without a discussion about money. Are there any costs associated with crossplay? If so, who would shoulder the burden of those costs? I don’t know much about the monetary burdens of crossplay but I would imagine there is some sort of cost associated with ensuring everyone can play together. Sony may be dragging its heels because it doesn’t want any extra costs added on to the maintenance of its service. I would counter this argument with the fact that both Microsoft and Nintendo are allowing crossplay and it doesn’t seem to be financially hurting them. It would stand to reason then that Sony, the console market leader, wouldn’t miss out on too much money if they allowed crossplay. As with the technical side of things, I don’t know for certain if there is a monetary issue getting in the way of crossplay but I’m sure it has something to do with it.

One thing I do know for sure is that Sony doesn’t like the idea of allowing Epic Games accounts for Fortnite to be used on other consoles. There is an argument to be made about financial costs here. If someone buys something for Fortnite on a Switch and the purchase is associated with an account, and then the same user logs in to play on PS4, then Nintendo would get a cut of the sale but not Sony. This could lead to a potentially serious amount of lost sales as people could make all their purchases on one console, play on another, and the console network seeing the most playtime would be at a financial disadvantage. You could argue that that is what the PS Plus subscription is for but that pays for the whole network (not just for a single game) and for the “free” games given away each month to subscribers. Sony may be holding out for a deal where the money is shared amongst the platform holders for every sale. Or it just thinks it’s too much of a hassle to attempt such a deal and thus won’t even bother with crossplay. Again, I would argue that since both Nintendo and Microsoft are offering crossplay without such a deal then it wouldn’t affect Sony’s bottom-line all that much as the market leader.

I admit this is more of a personal concern than it is Sony’s since it probably doesn’t give a crap about this. My worry is that if all the console manufacturers do get together and allow crossplay, then it could lead to them freezing competitors out of the deal. Say a new console from another company enters the market at some point in the future and wants in on the crossplay action. The ones who are already involved with crossplay could block this new console from joining in whether indirectly by charging a fee to join or outright by just saying “no.” This could lead to a sort of “crossplay oligarchy” where the Big Three control the market entirely (PC really doesn’t count since it’s not controlled by one company, unless you count Valve, but that’s another story). I would say that normally this type of situation could be challenged in court but in today’s climate you never know.

Sony’s stance on crossplay seems really stubborn and counterproductive to most of us. Despite this, I hope I have articulated a few legitimate reasons as to why Sony may be reluctant to allow it to happen. We know that crossplay is a lot easier to achieve than what most of us thought since Epic Games accidentally allowed crossplay in Fortnite late last year. That is why I believe Sony isn’t allowing it because it is the market leader, crossplay may pose a security risk, and the money issue hasn’t been sorted out yet. Despite all of these potential concerns, I think Sony should allow crossplay because the tables could turn later on down the road and, if nothing else, it would make its PR problem surrounding this issue go away relatively quickly. 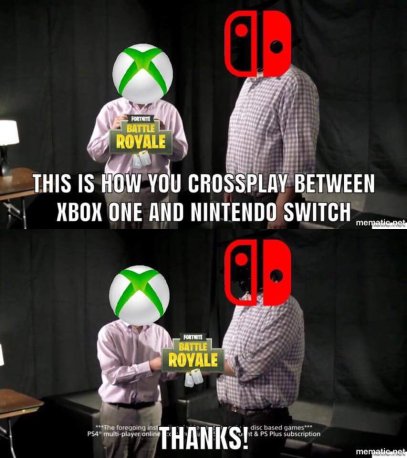 Thanks for reading and I hope you enjoyed my thoughts on crossplay! What do you think of this whole situation? Do you think Sony should allow crossplay? If not, why do you think they should continue to block it? Let me know!