A thoughtful journey about what we leave behind.

FAR: Lone Sails is a lonely journey through a world that is past its prime. You play as a red-clad individual (the game never really specifies if it’s human or not) who must guide a large homemade vehicle through the remains of what once was a highly advanced civilization. Empty factories, beached ships, and abandoned homes serve as the scenery during the long trip. It isn’t clear what calamity has doomed the world though most people can probably guess. These scenes of industrial decay, coupled with the excellent soundtrack, successfully create a thought-provoking atmosphere during the game’s relatively short duration. 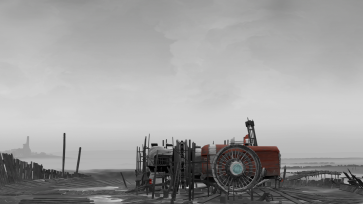 As a side-scrolling platformer, the gameplay of FAR: Lone Sails is very simple. It’s so simple in fact that the game doesn’t have a tutorial. It gives you a few button prompts in the beginning but beyond that you’re on your own (which, in retrospect, kind of ties into the loneliness of the experience). It doesn’t even tell you how to operate the vehicle I mentioned above either. You must figure that out by yourself. Thankfully, it isn’t too complicated and you can have the vehicle moving in a matter of minutes.

The vehicle itself needs energy in order to operate. Energy can be generated from objects found lying around the desolate world. Any object within the game can be incinerated for fuel. There were a few times when I thought I wasn’t going to have enough energy to get to the next checkpoint but then an object would suddenly appear thus allaying my fears. FAR: Lone Sails gives the impression that you have to hoard supplies in order to make it but, in retrospect, objects were plentiful so there really wasn’t anything to worry about.

During the journey, your vehicle will become obstructed by numerous obstacles; bridges, gates, etc. At these locations, you are forced to disembark in order to find a way to get the vehicle rolling again. This usually entails solving a puzzle. There are several of these throughout the game and they aren’t too hard to solve even with the lack of clues. A few of these puzzles, upon their successful completion, yield new parts for the vehicle. These parts range from a sail to a device which sucks up objects while the vehicle is in motion. All of the parts that you pick up on the trip are useful in their own way and are necessary in order to move forward. 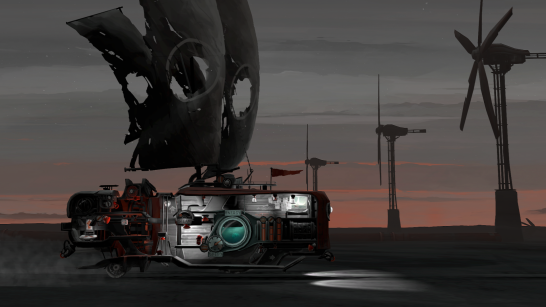 There are no enemies in the game but that doesn’t mean you can’t die. I died a few times from fire. Most fires flare up on the vehicle after it becomes damaged (usually when it runs into an obstacle blocking its path). The fires must be put out and the vehicle repaired. Environmental hazards can also cause death but there aren’t many of those during the course of the game. Death doesn’t mean game over but it does mean starting over at the last checkpoint.

The gameplay is all well and good but what really makes FAR: Lone Sails shine is its stellar atmosphere. Everything about the game contributes to it; the sparse environments, its color scheme, and especially the soundtrack (more on that later). Not to mention all of the decaying industrial structures you pass on your journey. There are no NPCs to interact with while playing so the story must be told through its visuals and its atmosphere. In this respect, FAR: Lone Sails excels. It is hard to put into words how all of these components made me feel during my time with the game but trust me when I say it is worth the time, effort, and money to experience it.

The best part of the atmosphere, in my opinion, is the soundtrack. Like any good soundtrack, it changes multiple times to fit the overall mood. It is at times sad and melancholic while at others hopeful, inspiring, and triumphant. Not only does it sound good but the developers also knew when and how to use it. There will be periods of silence followed by a swell of sound. In this way, the soundtrack perfectly complements the gameplay. It is used exceptionally well throughout the game. It has quickly become one of my favorite soundtracks of all time.

FAR: Lone Sails is truly a unique game. With neither dialogue nor NPCs, it is able to convey a thought-provoking and lonely tale. Its scenes of industrial decline coupled with an excellent soundtrack make for a compelling atmosphere that will stick with you long after you finish the game. It is short but it is well worth it. I wholeheartedly recommend it for those who like moody, atmospheric games.