Samurai and demons and princesses, oh my!

Whenever a remaster of a classic game releases on modern hardware and is reviewed positively, one has to wonder if nostalgia plays a large part in it. While I believe this does happen sometimes, I can assure you all that this is not the case with this review. Why, you ask? That’s because, dear reader, I had never played Onimusha: Warlords before now. I therefore could not be nostalgic about it. Just trust me when I say that Onimusha is a great game and I enjoyed the hell out of it.

Onimusha: Warlords is a third-person action-adventure game. As I alluded to above, I played the version that was recently released for modern hardware. Set during the Sengoku (or Warring Lords) Period of Japan, Onimusha stars a samurai warrior named Samanosuke Akechi. Although the game does feature several historical figures (including Oda Nobunaga), the story quickly departs reality when demons start showing up.

Onimusha: Warlords asks the question “What would a game’s story be like if all the fluff was cut out of it?” and then answers it. The resulting story is short but epic. It gets going and doesn’t stop until the very end. The tale begins when a certain Princess Yuki writes Samanosuke about strange disappearances that have been occurring at Inabayama Castle and she muses it might be the work of monsters. Samanosuke runs to answer the call but arrives too late as Princess Yuki has been kidnapped by the demons. Samanosuke and his friend Kaede must find the princess before the demons can complete their nefarious plans. 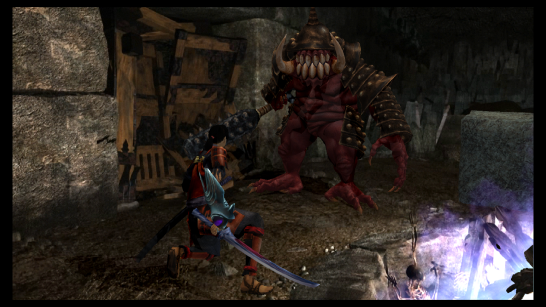 As I said, the story is very, very short. I finished the game within four hours (not counting the time to fight the last boss a couple of times). The length of the game did not detract from my enjoyment of it, however. It did have a few shortcomings though. One downside is that it’s told through cutscenes which can’t be skipped no matter how times you’ve seen them before (which is really annoying). I know I’m in the minority here but I enjoyed the cheesy voice acting that is definitely indicative of the era the game originally released in. Just know going into the game that the voice acting is very campy and is not the best. Another issue with the story is that there are a few threads that weren’t wrapped up during the game. From what I’ve read online, the unresolved story conflicts are resolved in the sequels. I therefore hope they will also be re-released soon. Get on it, Capcom!

As for the gameplay, Onimusha: Warlords is a third-person action adventure title that features an old-school fixed camera perspective that changes as you move through a level. This is perhaps the biggest enemy of the whole game as the camera can oftentimes hide enemies that can cause serious damage when they jump at Samanosuke from offscreen. In Onimusha’s defense, though, this happens in many games even if they do have a camera that can be freely moved around so it’s really not too big of a deal.

Samanosuke can wield several different swords which can be upgraded (he also has a bow and arrows) using energy collected from defeated demons. This energy can also be used to upgrade a special gauntlet that Samanosuke receives which he can then use to unlock doors that have different colored seals on them. In addition to Samanosuke, you sometimes get to play as Kaede, his companion. Combat with her is tougher since her equipment can’t be upgraded. She also can’t unlock the sealed doors but she can use a lockpick to unlock other doors, however. In this way, the game ingeniously ensures that either character can only travel through certain areas. 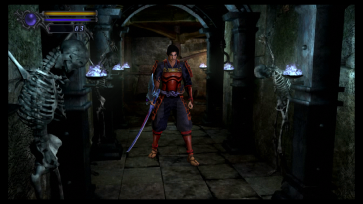 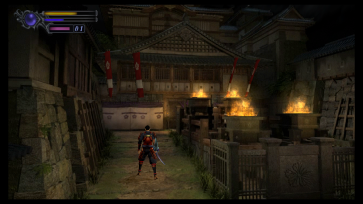 There isn’t too much challenge to be found within Onimusha though a few of the bosses did give me trouble. This is especially true of the final boss. He is one tough cookie. Don’t go into the game expecting a hearty challenge because you’ll be disappointed. Challenge can be found, however, in the Dark Realm. The Dark Realm is a multi-level affair where you face off against waves of enemies. It’s made all the more challenging by how cramped the fighting arena is. I personally haven’t finished the Dark Realm yet but it is on my list of things to do.

Onimusha also features several puzzles and mechanics involving items you would usually find in a point ‘n click adventure game. What I mean by that is there are several instances where, in order to progress, you need to find and use the correct item. It isn’t very difficult to figure out what you need to do unlike some of those point ‘n click titles though *cough* Thimbleweed Park *cough*. The other puzzles are mostly of the sliding block variety. Again, they aren’t that difficult but one in particular was memorable because you have to solve it under duress (that damn water puzzle!). All-in-all, I was impressed with how Onimusha handled its puzzles and mechanics.

How can I solve it? 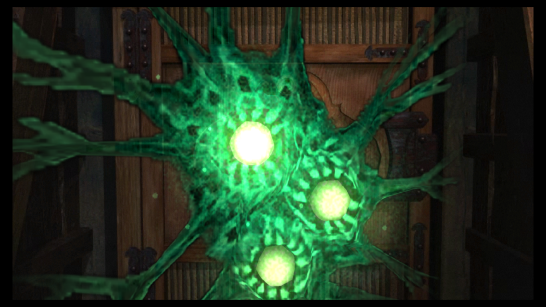 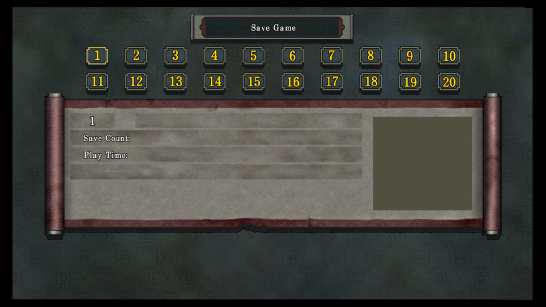 Why are there so many save slots?

Before I end this review, I wanted to talk about the game’s visual style and soundtrack. The game features 3D sprites set on hand-painted backgrounds. I could be describing it incorrectly though (you’ll see what I mean in the screenshots). Regardless of what it is, I liked the visual style of Onimusha. As for the soundtrack, I thought it was awesome. The re-release does feature a different soundtrack from the original release so I don’t know what it sounded like originally. All I know is that the new tracks perfectly complemented the cutscenes and story beats. My favorite piece was the final boss theme. I have listened to that thing several times since I finished the game.

If you asked me why I liked Onimusha so much, I couldn’t give you one specific answer. I liked its fast-moving story, the combat, the campy voice acting, the visual style, and the soundtrack. It does have its shortcomings though; the unskippable cutscenes (especially if you’re seeing them for the fifth time), the unhelpful fixed camera angles, and its short length. Although it was short, I did something with Onimusha: Warlords that I rarely do with games. Right after the credits ended, I started a new game on a harder difficulty. I really, really enjoyed my time with Onimusha and I think you all would too.

One thought on “Onimusha: Warlords Review”